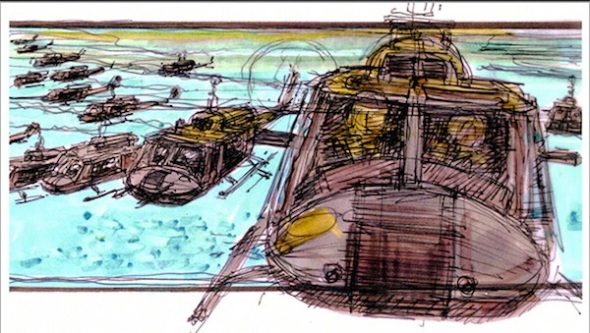 Explore the making of the 1987 Vietnam War film “Full Metal Jacket” like never before with a new iPad app, created in a collaboration between the film’s star Matthew Modine and artist Adam Rackoff.

The partially Kickstarter-funded app is comprised of Modine’s personal diary, whose detailed accounts from the film’s two year shoot originally made up the 2005 book “Full Metal Jacket Diary.” Now, with the help of Rackoff, the original diary has been adapted into an app that combines audio effects, original footage, interviews, Modine’s first-hand observations of Stanley Kubrick at work, and Modine’s out-of-print original diary into one all-encompassing experience, now available on Apple’s App Store or at the fullmetaljackdiary, along with stills from the set and the diary in print form.

Matthew Modine’s FULL METAL JACKET DIARY is a premium app experience that offers users the choice to read or listen to his diary and includes the following features:

I’ll be purchasing one of these VERY soon…

Conrad is regarded as one of the great novelists in English, although he did not speak the language fluently until he was in his twenties (and then always with a marked Polish accent). He wrote stories and novels, predominantly with a nautical setting, that depict trials of the human spirit by the demands of duty and honour. Conrad was a master prose stylist who brought a distinctly non-English tragic sensibility into English literature. While some of his works have a strain of romanticism, he is viewed as a precursor of modernist literature. His narrative style and anti-heroic characters have influenced many authors.

Writing in the heyday of the British Empire, Conrad drew upon his experiences in the French and later the Britich Merchant Navy to create short stories and novels that reflect aspects of a worldwide empire while also plumbing the depths of the human soul.

I’ve only actually read, Heart of Darkness and Lord Jim, I’ve intended to read the copy of Nostromo that’s on my bookshelf for the last 10 years but not managed yet… soon.

Heat of Darkness centres on Charles Marlow, who narrates most of the book. He is an Englishman who takes a foreign assignment from a Belgian trading company as a river-boat captain in Africa. Heart of Darkness exposes the dark side of Belgian colonization while exploring the three levels of darkness that the protagonist, Marlow, encounters: the darkness of the Congo wilderness, the darkness of the Belgians’ cruel treatment of the African natives, and the unfathomable darkness within every human being for committing heinous acts of evil. Although Conrad does not give the name of the river, at the time of writing the Congo Free State, the location of the large and important Congo River, was a private colony of Belgium’s King Leopold II. In the story, Marlow is employed to transport ivory downriver. However, his more pressing assignment is to return Kurtz, another ivory trader, to civilization, in a cover-up. Kurtz has a reputation throughout the region.

This symbolic story is a story within a story or frame narrative. It follows Marlow as he recounts from dusk through to late night, to a group of men aboard a ship anchored in the Thames Estuary, his Congolese adventure. The passage of time and the darkening sky during the fictitious narrative-within-the-narrative parallel the atmosphere of the story.

A few films have been adapted from or inspired by Conrad’s novels and short stories: Victory, Lord Jim, The Secret Agent, An Outcast of the Islands, The Rover, The Shadow Line, The Duel, Heart of Darkness, Nostromo and Almeyer’s Folly. Of course the most famous adaptation of Heart of Darkness is Francis Ford Coppola’s 1979 motion picture ‘Apocalypse Now’, which moves the story from the Congo to Vietnam and Cambodia during the Vietnam War. In Apocalypse Now, Martin Sheen plays Captain Benjamin Willard, a US Army officer charged with “terminating” the command of Colonel Walter E. Kurtz, played by Marlon Brando, it remains one of his most famous roles.

A squad of Louisiana National Guardsmen set out for weekend manoeuvres in the bayou. Their objective is simple; all they have to do is navigate through the swamp to a designated meeting point then they can go home. These weekend warriors, led by Staff Sergeant Poole (Peter Coyote) are a disparate group; private Spencer (Keith Carradine) is the cool intellectual of the group, who has organised some prostitutes for the squad at the end of the training; Corporal Hardin (Powers Boothe) has been transferred from Texas; Corporal Lonnie Reece (Fred Ward) the redneck racist; Stuckey (Lewis Smith) the loose cannon; Sergeant Casper (Les Lannom): Corporal ‘Coach’ Bowden (Alan Autry), a gum teacher by trade who is more than a little gung-ho and private Tyrone Cribbs (T.K. Carter), and Simms  (Franklyn Seales) are excellent support.

As they bitch and complain while trudging through the swamp they realise that recent rains have cut them off form their objective, desperate to finish the job and go home they steal some local Cajun canoes. In a moment of stupidity, Stuckey fires off some blank rounds at the locals who return live fire, killing Sergeant Poole. The guardsmen make it to the opposite shore where leaderless, their lack of experience is exposed as panic sets in and a thirst for revenge clouds their judgement.

They catch a one-armed local (Brion James), blaming him for Poole’s death, they beat him and accidentally destroy his home before dragging him off through the swamp to bring him to ‘justice’. However, they are pursued by a group of locals (including Sonny Landham) who know the swamp and are far more equipped to deal with the game of cat and mouse which unfolds.

Director Walter Hills feature ‘Southern Comfort’ (1981) stirs up comparisons to John Boorman’s ‘Deliverance’ and to a lesser extent ‘First Blood’. The film is an intense chase-thriller, full of suspense, exhilarating, tense and atmospheric. An excellent script, lean and taut, Hill spends a brief amount of time introducing us to the characters before throwing them and us headlong into the action. Their various character flaws bubble to the surface as their situation worsens and the tension mounts. The cast are all solid delivering a good ensemble performance.

Beautifully shot by Andrew Lazslo, cinematographer for Hill’s ‘The Warriors’ and ‘Streets of Fire’ as well as the similar ‘First Blood’. Using the light and reflections within the swamp to full effect to create a claustrophobic and haunting setting; the Cajun hunters are almost ghost like, we never see them clearly until the end of the movie.

The soundtrack by Hill regular Ry Cooder is eerie and seductive. It draws the viewer into the scenes, expanding the visuals; it’s both unnerving and beautiful. Cooder has supplied scores for other Walter hill movies ‘The Long Riders’, ‘Streets of Fire’, ‘Crossroads’ and ‘Geronimo’ as well as beautiful scores for ‘Alamo Bay’ and ‘Paris, Texas’.

The film was seen at time of release as a Vietnam allegory but that perception has waned slightly over the years. It still looks and feels contemporary and any first time viewer would be hard pressed to say with any certainty when it was made or indeed, when it is set.

Highly recommended; this is another triumph of muscular film making from director Walter Hill. Southern Comfort is as good as the best Vietnam movies of the 80’s and better than the rest.

47 years ago. August 7, 1964 US Congress passed the Gulf of Tonkin resolution, marking the official start of the Vietnam war. It gave President Johnson broad powers in dealing with North Vietnamese attacks on US forces. The war inspired Francis Coppola to direct Apocalypse now… see what I did there?

Apocalypse Now / Apocalypse Now: Redux
In the tradition of such obsessively driven directors as Erich von Stroheim and Werner Herzog, Francis Ford Coppola approached the production of Apocalypse Now as if it were his own epic mission into the heart of darkness. On location in the storm-ravaged Philippines, he quite literally went mad as the

project threatened to devour him in a vortex of creative despair, but from this insanity came one of the greatest films ever made. It began as a John Milius screenplay, transposing Joseph Conrad’s classic story “Heart of Darkness” into the horrors of the Vietnam War, following a battle-weary Captain Willard (Martin Sheen) on a secret upriver mission to find and execute the renegade Colonel Kurtz (Marlon Brando), who has reverted to a state of murderous and mystical insanity. The journey is fraught with danger involving wartime action on epic and intimate scales. One measure of the film’s awesome visceral impact is the number of sequences, images, and lines of dialogue that have literally burned themselves into our cinematic consciousness, from the Wagnerian strike of helicopter gunships on a Vietnamese village to the brutal murder of stowaways on a peasant sampan and the unflinching fearlessness of the surfing warrior Lieutenant Colonel Kilgore (Robert Duvall), who speaks lovingly of “the smell of napalm in the morning.” Like Herzog’s Aguirre: The Wrath of God, this film is the product of genius cast into a pit of hell and emerging, phoenix-like, in triumph. Coppola’s obsession (effectively detailed in the riveting documentary Hearts of Darkness, directed by Coppola’s wife, Eleanor) informs every scene and every frame, and the result is a film for the ages.
Hearts of Darkness

Hearts of Darkness is an engrossing, unwavering look back at Francis Coppola’s chaotic, catastrophe-plagued Vietnam production, Apocalypse Now. Filled with juicy gossip and a wonderful behind-the-scenes look at the stressful world of moviemaking, the documentary mixes on-location home movies shot in the Philippines by Eleanor Coppola, the director’s wife, with revealing interviews with the cast and crew, shot 10 years later. Similar to Burden of Dreams, Les Blank’s absorbing portrait of Werner Herzog’s struggle to make Fitzcarraldo, the film chronicles Coppola’s eventual decent into obsessive psychosis as everything that could go wrong does go wrong. Storms destroy sets, money evaporates, the Philippine government continually harasses the director, Coppola has romantic affairs, and he can’t write the story’s ending. Everything is captured on film. In the most disturbing scene, we watch Martin Sheen have a drunken nervous breakdown while his director goads him on (he eventually suffered a heart attack, but finished the film).
Other incredible footage is not visual, but aural as the film includes tapes Eleanor Coppola recorded without Francis’s knowledge. In them, he truly sounds like a madman as he confesses his fears about making a bomb of a movie. But while Hearts of Darkness is an amazing, voyeuristic experience, its importance lies in the personal reflections offered by those involved. Sheen, Coppola, and Dennis Hopper speak frankly without embarrassment, offering us an essential piece of film history.

The Blu-Ray edition of Apocalypse Now is finally out here in Australia, and it’s awesome. Apocalypse Now – The 1979 Cut and Apocalypse Now Redux are presented for the first time in Hi-Def; Exclusive to Full Disclosure edition: Hearts of Darkness, the feature-length making-of documentary with optional audio commentary from Eleanor and Francis Ford Coppola;  Exclusive to Full Disclosure edition: 48-page printed collectible booklet with letter from Francis Ford Coppola, never-before-seen archives from the set, behind-the-scenes photos and more! Gotta get one.