The Boy is an original horror-thriller directed by William Brent Bell (The Devil Inside) starring Lauren Cohan (“The Walking Dead”).
Greta (Cohan) is a young American woman who takes a job as a nanny in a remote English village, only to discover that the family’s 8-year-old is a life-sized doll that the parents care for just like a real boy, as a way to cope with the death of their actual son 20 years prior. After violating a list of strict rules, a series of disturbing and inexplicable events bring Greta’s worst nightmare to life, leading her to believe that the doll is actually alive.

Friday the 13th: The Game

Jason Voorhees is unleashed and stalking the grounds of Camp Crystal Lake! Now we need your help to make this game an amazing reality! Check out the Kickstarter campaign HERE 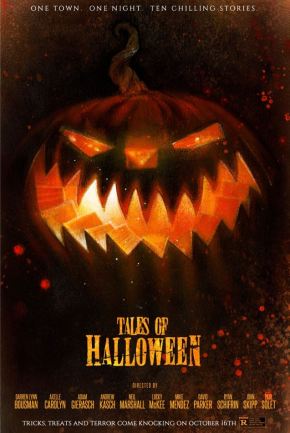 The horror anthology Tales of Halloween boasts contributions from a small army of well-regarded genre directors, an even larger number of terror veterans in its cast, and opening theme music from legendary Bullitt and Dirty Harry composer Lalo Schifrin. The movie, brainchild of writer-director Axelle Carolyn, which Epic Pictures is releasing in theaters and on VOD, Oct. 16 The film has a new poster by Drew Struzan, the legendary artist whose work played such a seminal role in the marketing campaigns of the Star Wars, Back to the Future, and Indiana Jones movies, to name a few.

In a statement from The Descent filmmaker Neil Marshall, who directs one of the 10 interconnected Tales of Halloween segments, he explains how Struzan came to produce the image (turns out it doesn’t hurt to cast him in your movie).

To film geeks and movie poster collectors such as myself, Drew Struzan represents something that often seems to have been lost in recent years; the ART of movie poster design. The ability of someone to capture the essence of a movie in a single painted image and create a genuine work of art you’d be proud to hang on your wall.  So it’s an unbelievable privilege for our little film to be blessed by one of Drew’s beautiful paintings. It was incredible enough to have Drew play his first ever cameo (along with his son Christian) in my segment of Tales of Halloween. The poster itself came about when Axelle (Carolyn, my wife and also creator, producer and fellow director of the movie) plucked up the courage to ask him over dinner one night. I suspect though, since Drew is such a thoughtful and generous person, that he might have been upset if we hadn’t asked him. Either way, we’re honoured to have Drew’s incredible artwork grace our movie, and I for one will be making space on my wall for this beautiful poster.

I won’t make a more important or inspiring post than this one. Please head over to the indiegogo site to be enthralled the Deane Taylor passion project Jinko, an epic fantasy adventure about an orphaned sea gypsy who brings peace to a hidden world at war… and donate for your chance to be involved in an exceptional Australian adventure and receive some incredible art by Deane.

JINKO CF video from a schuppan on Vimeo.  Jinko on Idiegogo HERE  Jinko on Facebook HERE

Mark Kermode pays tribute to Wes Craven – one of the most gifted horror directors of our time.

The first trailer for Sundance winner Robert Eggers new film, The Witch, out in 2016.

Writer/director Robert Eggers’ debut feature, which premiered to great acclaim at the 2015 Sundance Film Festival (and won the Best Director Prize in the U.S. Narrative Competition), painstakingly recreates a God-fearing New England decades before the 1692 Salem witch trials, in which religious convictions and pagan folklore famously clashed. Told through the eyes of the adolescent Thomasin – in a star-making turn by newcomer Anya Taylor-Joy – and supported by mesmerizing camera work and a powerful musical score, THE WITCH is a chilling and groundbreaking new take on the genre.

James McAvoy and Daniel Radcliffe star in a dynamic and thrilling twist on a legendary tale. Radical scientist Victor Frankenstein (McAvoy) and his equally brilliant protégé Igor Strausman (Radcliffe) share a noble vision of aiding humanity through their groundbreaking research into immortality. But Victor’s experiments go too far, and his obsession has horrifying consequences. Only Igor can bring his friend back from the brink of madness and save him from his monstrous creation.