Posts tagged “The Hobbit: There And Back Again” 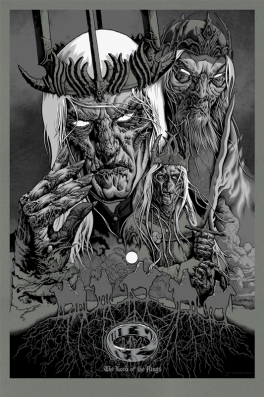 The Frighteners was regarded as a commercial failure. In February 1997, Jackson launched legal proceedings against the New Zealand Listener magazine for defamation, over a review of The Frighteners which claimed that the film was “built from the rubble of other people’s movies”. In the end, the case was not pursued further. Around this time Jackson’s remake of King Kong was shelved by Universal Studios, allegedly because Mighty Joe Young and Godzilla, both giant monster movies, that had already gone into production. Universal feared it would be thrown aside by the two higher budget movies.

Peter Jackson won the rights to film J. R. R. Tolkien’s epic in 1997 after meeting with producer Saul Zaentz. Originally working with Miramax towards a two-film production, Jackson was later pressured to render the story as a single film, and finally overcame a tight deadline by making a last minute deal with New Line, who were keen on a trilogy.

With the benefit of extended post-production and extra periods of shooting before each film’s release, the series met huge success and sent Jackson’s popularity soaring. The final installment, The Return of the King itself met with huge critical acclaim, winning eleven Academy Awards, including Best Picture and Best Director. The film was the first of the fantasy film genre to win the award for Best Picture and was the second sequel to win Best Picture (the first being The Godfather Part II).

Universal Studios signed Peter Jackson for a second time to remake the 1933 classic King Kong, the film that inspired him to become a film director as a child. He was reportedly paid a fee of US$20 million upfront, the highest salary ever paid to date to a film director in advance of production, against a 20 percent take of the box-office rentals (the portion of the price of the ticket that goes to the film distributor, in this case Universal). The film was released on 14 December 2005, and grossed around US$550 million worldwide.

Jackson completed an adaptation of Alice Sebold’s bestseller, The Lovely Bones, which was released in the United States on 11 December 2009. Jackson has said the film was a welcome relief from his larger-scale epics. The storyline’s combination of fantasy aspects and themes of murder bears some similarities to Heavenly Creatures. The film was an anticipated Best Picture Oscar contender, but ended up receiving poor reviews and middling box office returns. It currently holds a 32% rotten on Rotten Tomatoes.

Jackson is the main producer on The Adventures of Tintin, directed by Steven Spielberg. He is officially labeled as producer but helped Spielberg, before he began working on the script for The Hobbit. He also supervised Weta Digital on the post production of the film. In December 2011, Spielberg confirmed a sequel to his 3D movie will be made and are said to be based on The Seven Crystal Balls and Prisoners of the Sun. He explained the Thompson detectives will “have a much bigger role”. The sequel will be produced by Spielberg and directed by Jackson.

Jackson’s involvement in the making of a film version of The Hobbit has a long and chequered history. In November 2006, a letter from Peter Jackson and Fran Walsh stated that due to an ongoing legal dispute between Wingnut Films (Jackson’s production company) and New Line Cinema, Jackson would not be directing the film. New Line Cinema’s head Robert Shaye commented that Jackson “…will never make any movie with New Line Cinema again while I’m still working at the company…” This prompted an online call for a boycott of New Line Cinema, and by August 2007 Shaye was trying to repair his working relationship. On 18 December 2007, it was announced that Peter Jackson and New Line Cinema had reached agreement to make two prequels, both based on The Hobbit, and to be released in 2012 and 2013 with Jackson as a writer and executive producer and Guillermo del Toro directing.

However, in early 2010, del Toro dropped out of directing the film because of production delays and a month later Jackson was back in negotiations to direct The Hobbit; and on October 15 he was finalised as the director, with New Zealand confirmed as the location a couple of weeks later. The film started production on March 20, 2011. On July 30, 2012, Peter Jackson announced via his Facebook page that the two planned ‘Hobbit’ movies would be expanded into a trilogy. The third film will not act as a bridge between The Hobbit and The Lord of the Rings films, but would continue to expand The Hobbit story by using material found in the Lord of the Rings Appendices. The films are The Hobbit: An Unexpected Journey (2012), The Hobbit: The Desolation of Smaug (2013), and The Hobbit: There and Back Again (2014).

November 1, 2012 | Categories: Biography, Biography: DIRECTORS | Tags: King Kong, Return of the King, The Hobbit: An Unexpected Journey, The Hobbit: The Desolation Of Smaug, The Hobbit: There And Back Again, The Lord of the Rings, The Lovely Bones, The Two Towers, Weta Digital, Weta Workshop | 1 Comment

Sir Peter Robert Jackson, ONZ, KNZM (born 31 October 1961) is a New Zealand film director, producer, actor, and screenwriter, who is mainly known for his The Lord of the Rings film trilogy (2001 to 2003), adapted from the novel by J. R. R. Tolkien.

He won international attention early in his career with his horror comedies beginning with Bad Taste (1987), Meet the Feebles (1989), and Braindead (1992) before coming to mainstream prominence with Heavenly Creatures (1994), for which he shared an Academy Award for Best Original Screenplay nomination with his wife, Fran Walsh. Jackson has been awarded three Academy Awards in his career, including the award for Best Director in 2003; he also won the BAFTA, Golden Globe and Saturn Award for Best Direction the same year.

Jackson was born on 31 October 1961. He grew up in Pukerua Bay, a coastal town near Wellington. As a child, Jackson was a keen film fan, growing up on Ray Harryhausen films as well as finding inspiration in the television series Thunderbirds and Monty Python’s Flying Circus. After a family friend gave the Jacksons a Super 8 cine-camera with Peter in mind, he began making short films with his friends. Jackson has long cited King Kong as his favourite film and around the age of nine he attempted to remake it using his own stop-motion models.

When he was 16 years old, Jackson left school and began working full-time as a photo-engraver for the local newspaper. For the 7 years he worked there, Jackson lived at home with his parents so he could save as much money as possible to spend on filming equipment. After two years of work Jackson bought a 16 mm camera, and began shooting a short film that later became Bad Taste.

Over four years (from 1983 to 1987) Jackson’s first feature, Bad Taste, grew in haphazard fashion from a short film into a 90-minute splatter-comedy, with many of Jackson’s friends acting and working on it for free. Shooting was normally done in the weekends since Jackson was now working full-time. Bad Taste is about aliens that come to earth with the intention of turning humans into food. Jackson had two acting roles including a famous scene in which he fights himself on top of a cliff.

The film was finally completed thanks to a late injection of finance from the New Zealand Film Commission, after Jim Booth, the body’s executive director, became convinced of Jackson’s talent (Booth later left the Commission to become Jackson’s producer). In May 1987, Bad Taste was unveiled at the Cannes Film Festival, where rights to the film quickly sold to twelve countries.

Jackson’s next film to see release was Meet the Feebles (1989), co-written by the four writers mentioned above. An ensemble musical comedy starring Muppet-style puppets, Meet the Feebles originally began as a short film intended for television, but was rapidly expanded into a full-length film after unexpected enthusiasm from Japanese investors, and the collapse of Braindead, six weeks before filming. Begun on a very low budget, Meet the Feebles went weeks over schedule. Jackson stated of his second feature length film, “It’s got a quality of humour that alienates a lot of people. It’s very black, very satirical, very savage.”

Jackson’s next release was the horror comedy Braindead (1992) (released in North America as Dead Alive), now seen as a landmark in splatter movies. Originally planned as a Spanish co-production, the film reversed the usual zombie plot. Rather than keeping the zombies out of his place of refuge, the hero attempts to keep them inside, while maintaining a façade of normality. The film features extensive special effects including miniature trams, stop motion and a plethora of gory make-up effects.

Released in 1994 after Jackson won a race to bring the story to the screen, Heavenly Creatures marked a major change for Jackson in terms of both style and tone. The film is based on real-life events: namely the Parker-Hulme murder in which two teenage girls in 1950s Christchurch murdered the mother of one of the girls. Jackson’s partner Fran Walsh helped persuade him that the events had the makings of a movie; Jackson has been quoted saying that the film “only got made” because of her enthusiasm for the subject matter. The success of Heavenly Creatures won Jackson attention from Miramax, who promoted the film vigorously in America and signed the director to a first-look deal.

The following year, in collaboration with Wellington film-maker Costa Botes, Jackson co-directed the mockumentary Forgotten Silver (1995). This ambitious made-for-television piece told the story of New Zealand film pioneer who had supposedly invented colour film and ‘talkies’, before being forgotten by the world. Though the programme played in a slot normally reserved for drama, no other warning was given that it was fictionalised and many viewers were outraged at discovering Colin McKenzie had never existed.

The success of Heavenly Creatures helped pave the way for Jackson’s first big budget Hollywood film, The Frighteners starring Michael J. Fox, in 1996. This period was a key one of change for both Jackson and Weta Workshop, the special effects company, born from the one man contributions of George Port to Heavenly Creatures, with which Jackson is often associated. Weta, initiated by Jackson and key collaborators, grew rapidly during this period to incorporate both digital and physical effects, make-up and costumes, the first two areas normally commanded by Jackson collaborator Richard Taylor.

The Hobbit: An Unexpected Journey

The latest tease for Peter Jackson’s The Hobbit: An Unexpected Journey has been released. The dwarves are back along with menacing monsters and fresh footage since the first trailer from last December. This one also has extra Gollum. This will be the first picture in what recently became a trilogy of Hobbit movies. In July, it was confirmed that Jackson would split what was a planned two-picture story into three films from JRR Tolkien’s book and 125 pages of appendices that the author included in a later publication of final Lord Of The Rings installment, The Return Of The King. Set in Middle-earth, 60 years before LOTR, The Hobbit trilogy kicks off with n Unexpected Journey on December 14 this year, followed by The Hobbit: The Desolation Of Smaug on Dec. 13, 2013 and The Hobbit: There And Back Again on July 18, 2014.

Will audiences hang around in similar numbers to The Lord of the Rings trilogy for 3 episodes of more characters walking without the epic battles and varying plot strands..?