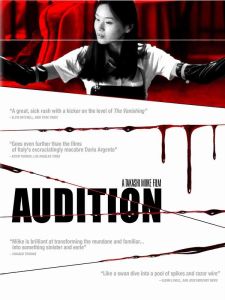 I don’t understand how this will work but Terminator, Rambo, and Basic Instinct exec producer Mario Kassar is assembling an English-language adaptation of Audition, the infamous 1997 novel by Japanese author Ryu Murakami about a lonely widower who gets more than he bargains for when he puts out a fake casting call to find a new girlfriend. Audition was, of course, adapted in 1999 into a cringe-inducing cult film in its own right by Japanese helmer Takashi Miike. The new Kassar-produced version is based on the original Murakami novel and will transplant the story to an American setting.

In this version, to be directed by Richard Gray, Audition‘s unlucky protagonist is Sam Davis, who lives alone with his son following the death of his wife seven years prior and is convinced by a filmmaker friend to stage the fake auditions. The former ballerina with a mysterious past he falls for is now named Evie Lawrence, but otherwise details fall closely in line with Murakami’s best-seller.

Gray adapted the script and will tackle a fall shoot for Audition after filming wraps on his current project, thriller Sugar Mountain starring Jason Momoa. He also helmed and produced the Justin Long crime thriller The Lookalike, which Well Go USA is releasing this summer. DEADLINE.

In 1844 Japan, a sadistic young Shogun, Lord Naritsugu Matsudaira is in line to ascend to the Shogunate where he will become second in command. The swearing in ceremony is scheduled to take place at the Akashi domain. Determined to stop him before he arrives at his destination is master Shogun Samurai Shinzaemon Shimada. He enlists the help of 11 Samurai and they head to the town of Ochlai where they plan to ambush Naritsugu and his army of 70 men. On their journey they get lost in the jungle and enlist the help of a local hunter as their guide and the 13th Assassin of the title.

As they prepare the small town of Ochlai for the ambush, they learn that although Naritsugu has delayed his journey, his arrival is imminent, and he now is now travelling with a 200 strong army. Massively outnumbered, the 13 would be assassins must battle against the odds to complete their suicide mission…

Takashi Miike, the controversial cult director behind ‘Audition’ and ‘Ichi the Killer’ has made one of his more accessible movies. That’s not to say that 13 Assassins doesn’t have some disturbing scenes and a lot of violence, it has those in abundance, however it is also a very traditional story about loyalty and honour. These principles are displayed by the contrasting beliefs of the two high ranked Samurai in the film. Our hero, Shinzaemon favours the belief that the Samurai are protectors of justice for the people of Japan, and his direct opponent and rival Hanbei, Lord Naritsugu’s number one, believes that a Samurai’s duty lies in complete and total servitude to their master.

Having said that, the main reason most will watch this film is for the action, and it delivers, the final battle sequence alone runs for almost 50 non-stop minutes! It is incredibly well choreographed and beautifully shot.

There are a few disturbing moments, this is a Takashi Miike film after all. They involve the cruelty of Naritsugu and are perhaps a little too extreme for this type of film; the first involves him shooting an entire family at close range with arrows and most disturbingly, we see the results of a girl he tortured by chopping off her arms, legs and cutting out her tongue. Miike makes Naritsugu so despicable that he’s almost a caricature of a bad guy.

The film will draw comparisons to Kurosawa’s ‘Seven Samurai’ however although a good movie and worth the effort, it’s not in the same class.