A fantastic Indiegogo campaign for all fans of Planet of the Apes. For over a century, Makeup Artists have dazzled audiences by creating extraordinary characters and creatures on screen. They make the impossible seem possible. 50 years ago, a group of ambitious artists led by JOHN CHAMBERS and TOM BURMAN ushered in a new era in cinema with their ground-breaking work on PLANET OF THE APES.
Now… MAKING APES: THE ARTISTS WHO CHANGED FILM is telling that incredible story!

Back the project HERE

MAKING APES: THE ARTISTS WHO CHANGED FILM is an upcoming feature length documentary about the Hollywood makeup artists who created the iconic makeups seen in the original 1968 classic Planet of the Apes and their impact on cinema.

Featuring interviews with makeup artists and actors from the original film franchise, modern makeup artists and filmmakers who were deeply influenced by the franchise and film historians who recognize Planet of the Apes as a breakthrough moment in cinema, this is a story 50 years in the making.

Many regard Planet of the Apes as a breakthrough moment for the motion picture industry. It is the film that proved anything could be done on screen. The impact was so great that makeup artist John Chambers was presented an Honorary Academy Award for Excellence in Makeup almost 12 years before The Oscars created a yearly category for the craft.

How They Made the Exploding Head in Scanners

Scanners, David Cronenberg’s 1981 film that defies explanation, is justly famous for not only its mind-bending narrative, but its torrent of effects, including one scene where, well, a guy’s head explodes. Check out this video and see how they did it!

In Scanners, the people who lend the film its title possess a telepathic ability which, in the film’s universe, manifests as ability to control another’s body, as well as hear their thoughts. Or, you know, explode their heads. (NOTE: if you are reading this, you almost certainly know that.) In the most famous scene from the film, an executive (who is a scanner himself) from the evil ConSec has his cranium demolished by a renegade scanner who is totally not down with ConSec and all their nefarious plans to weaponize other scanners. But how did they do it? Well, prepare to find out how Special Effects Supervisor Gary Zeller and Special Makeup Artist Stephan Dupuis made that head (which belongs to Canadian actor Louis Del Grande, for the record) explode!

Jack Pierce (born Janus Piccoula; May 5, 1889 – July 19, 1968) was a Hollywood make-up artist most famous for creating the iconic make-up worn by Boris Karloff in Universal Studios’ 1931 adaptation of Mary Shelley’s Frankenstein, along with various other classic monster make-ups for Universal Studios.

After immigrating to the United States from his native Greece as a teenager, Pierce tried his hand at several careers, including a stint as an amateur baseball player. In the opportunist twenties, Pierce embarked on a series of jobs in cinema—cinema manager, stuntman, actor, even assistant director—which would eventually lead to his mastery of in the field of makeup. In 1915 he was hired to work on crews for the studio’s productions. On the 1926 set of The Monkey Talks, Jack Pierce created the make-up for actor Jacques Lernier who was playing a simian with the ability to communicate. The head of Universal, Carl Laemmle, was won over with the creative outcome. Next came Conrad Veidt in The Man Who Laughs, also a silent Universal picture. Pierce was then immediately hired full-time by the newly established Universal Pictures motion picture studio. The 1930 death of Lon Chaney, who throughout the 1920s had made a name for himself by creating grotesque and often painful horror makeups, opened a niche for Pierce and Universal, Chaney’s films provided audiences with the deformed, monstrous faces that Pierce and moviegoers so clearly enjoyed.

Universal’s first talkie horror film, Dracula, eschewed elaborate horror make-up. Pierce designed a special color greasepaint for Bela Lugosi for his vampire character, but apparently the actor insisted on applying his own makeup. For all film appearances of the character thereafter, Pierce instituted a different look entirely, recasting Dracula as a man with greying hair and a moustache. The most significant creation during Pierce’s time at the studio was clearly Frankenstein, originally begun with Lugosi in the role of the Monster. The preliminary design was apparently similar to the Paul Wegener 1920 German film of The Golem. When James Whale replaced Florey as director, the concept was radically changed. Pierce came up with a design which was horrific as well as logical in the context of the story. So, where Henry Frankenstein has accessed the brain cavity, there is a scar and a seal, and the now famous “bolts” on the neck are actually electrodes; carriers for the electricity used to revive the stitched-up corpse. How much input director James Whale had into the initial concept remains controversial. Universal loaned out Pierce for the Lugosi film White Zombie. They also loaned out some of the Dracula sets for the troublesome filming. Lugosi had collaborated with Pierce on the look of his devilish character in the film.

Pierce’s make-up can be seen in Bride of Frankenstein (1935) and Son of Frankenstein (1939), The Mummy (1932), Lon Chaney Jr. as The Wolf Man (1941), and their various sequels associated with the characters. He also helped comedian Bud Abbott augment his thinning hairline with a widow’s peak toupee in his early films with Lou Costello. Pierce’s final credit is as makeup artist for the TV show Mister Ed from 1961 to 1964. He died in 1968 from uremia.

Jack Pierce’s enduring work at Universal has become a huge influence to many in the entertainment field, including make-up artists Rick Baker and Tom Savini. Jack Pierce was an innovator in the world of screen entertainment and material design. Pierce understandably felt he never got the recognition he deserved and died a bitter man. Finally, in 2003, Pierce was recognized with a lifetime achievement award from the Hollywood Make-up Artist and Hair Stylist Guild.

In recent years, there is a strong desire to give Pierce a Hollywood Boulevard star for his popular lasting triumphs that have been preserved for decades on the movies he worked on. Pierce undeniably created screen icons to last beyond his lifetime. His contributions still continue to attract droves of attention to his astonishingly memorable, entirely original designs.

Learn how movie make-up master Rick Baker brings the Monster’s Bride to life and how he plans, paints and perfects his Zombie, a creature-creation the artist designed exclusively for M∙A∙C to inspire your Halloween look. Watch how to create the make-up magic yourself.

Check out these clips from the Turkish version of The Exorcist… so bad it’s awesome.

I’ve posted a link to this before, but thought it was worth another viewing. Check it out, time-lapse footage of Toby Jones being transformed into Hitchcock for his film ‘The Girl’ (HBO).

For Terminator 2: Judgment Day, in addition to the T-1000 puppets and effects, Stan Winston Studio created a series of appliance makeups for Arnold Schwarzenegger that would reveal the 800-series Terminator’s deterioration through the course of the story, as well as animatronic Schwarzenegger puppets for gags that couldn’t be performed by the actor or his stunt man, and full-sized, articulated endoskeletons for an opening future war sequence.

Check out these designs, sculpture and Make-Up from the Stan Winston Studios for the original Sam Raimi directed Spider-Man… I love Sam, but he made a mistake in not using these… 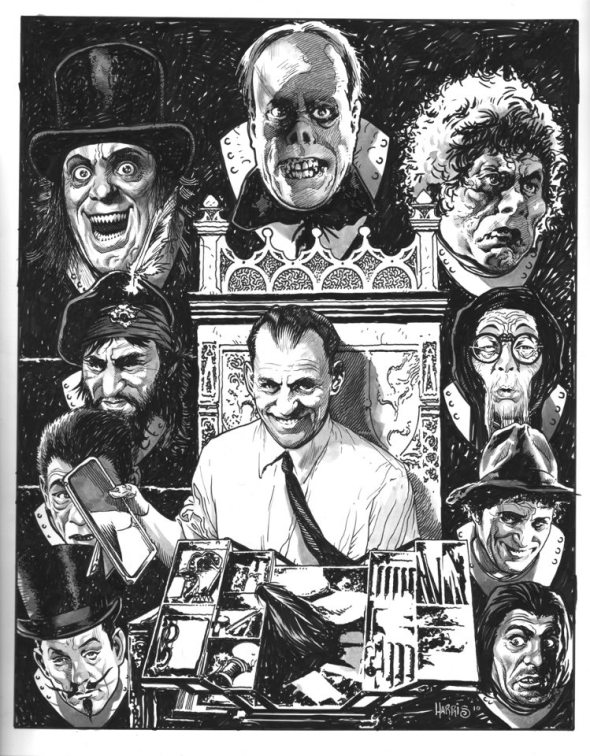 Beverly Hills, CA – The Academy of Motion Picture Arts and Sciences today announced that seven films remain in competition in the Makeup category for the 84th Academy Awards®.

The films are listed below in alphabetical order:

On Saturday, January 21, all members of the Academy’s Makeup Branch will be invited to view 10-minute excerpts from each of the seven shortlisted films. Following the screenings, members will vote to nominate three films for final Oscar consideration.

The 84th Academy Awards nominations will be announced live on Tuesday, January 24, at 5:30 a.m. PT in the Academy’s Samuel Goldwyn Theater.

I saw Tom Savini on Saturday the 7th in Sydney, he said that the make-up work on the Iron Lady was some of the best he’s ever seen, that’s good enough for me!

Actor, director, stuntman, make up artist and all-round legend. Vanguard Cinema is proud to present an intimate evening with one of film’s greatest living treasures. Known for his ground breaking make-up work on Friday the 13th, Creepshow, and the George A. Romero Living Dead films, he has more recently been seen acting in films including From Dusk Till Dawn, Planet Terror and Machete.
This evening is for all fans of film, with a screening of some of his work, followed by a Q & A with Tom.

Richard A. “Rick” Baker (born December 8, 1950) is an American special make-up effects artist known for his realistic creature effects. Baker was born in Binghamton, New York, the son of Doris and Ralph B. Baker, a professional artist.

As a teen, Baker began creating artificial body parts in his own kitchen. He also appeared briefly in the “lost” classic fan production “The Night Turkey” a one hour B&W video parody of “The Night Stalker” (winner of the Best Short Film award at an early San Diego Comic-Con) directed by William Malone (who went on to direct feature films like the science fiction thriller Creature) and included in its cast Bill Mills and Robert Short (a fellow special makeup artist who also went on to win an Academy Award for his work in Beetlejuice).

Baker’s first professional job was as an assistant to the legendary Dick Smith on the film ‘The Exorcist’. He received the inaugural Academy Award for Best Makeup for his peerless work on ‘An American Werewolf in London’. He also created the “werecat” creature Michael Jackson transforms into in the music video ‘Thriller’. Subsequently, Baker has been nominated for the Best Makeup Oscar ten more times, winning on seven occasions, both records in his field. Baker claims that his work on ‘Harry and the Hendersons’ is one of his proudest achievements.

On 3 October 2009 he received the Jack Pierce – Lifetime Achievement Award title of the Chiller-Eyegore Awards. Known for his love of lyBaker most recently created the special makeup effects for the 2010 film ‘The Wolfman’ for which he also won an Academy Award in 2011.

Baker played the title role in the 1976 remake of ‘King Kong’. He also had cameos as the pilot and gunner (with director Peter Jackson) who shot down Kong in the 2005 remake of ‘King Kong’ and as a drug dealer with a business card in the John Landis film ‘Into the Night’. He also made a cameo appearance in the aforementioned Michael Jackson music video ‘Thriller’ as one of the zombies. He also makes a cameo in ‘The Wolfman’ as The Wolfman’s first kill. He would eventually win the Oscar for his work with the film’s makeup.

Baker also contributes commentaries to Joe Dante’s web series Trailers From Hell for trailers about horror and science fiction films. He was awarded a Doctorate of Humane Letters from the Academy of Art University in 2008.