Any regular visitors to this blog will be aware that I like a bit of LEGO and love Psycho… so you can imagine how good it was to find this clip by Bricktease. you can see more at his YouTube site HERE

Well that was quick.. a Lego version of the new Star Wars trailer is already online. Made by Snooperking, here’s what he had to say: “I had nothing to do yesterday so I started once the trailer came out so i built the Falcon, The X-Wing, The speeder bike thingy, a mini tie fighter, tried to build all the sets, and get all my minifigures put together… then just filming took forever especially the special effects… i tried stop motion in front of the green screen and that was hard and by this time it was 3am so like more than 12 hours (it took a 3 hour break somewhere) and then finally gave up and used sewing string for the X-Wing and just kind of moved my camera around the falcon, I wasn’t as happy with the falcon shot but I cant work on it at all today so I had to finish it like 4 hours ago, but I just woke up to go to my grandparents house, and now you know everything about how it was made!”

LEGO is the biggest retail toy in the world, bought by adults and kids alike… new versions of the Ghostbusters car and headquarters, batmobile and Simpsons house have pushed the little bricks to the top of workplace shelves worldwide. Minifigs have been creating specialist figures for some time now, they made Oh The Horror series 1 last year and are back with series 2. Featuring tributes to horror icons such as Freddy, Jason, Michael Myers, Jigsaw, Leatherface, Pinhead, Ghostface, Ash and Norman Bates among others. Get them HERE 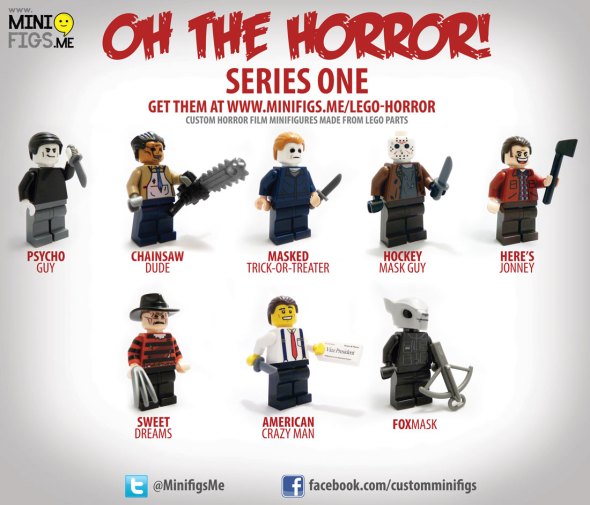 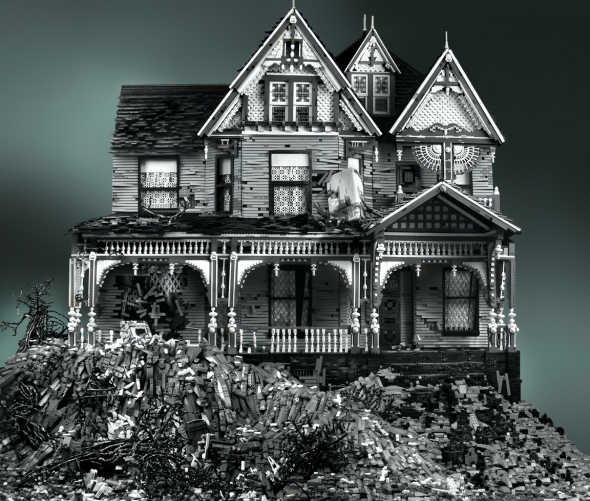 We all love playing with LEGO, but artist Mike Doyle is a guy who doesn’t mind spending countless hours upon hours in his endeavor to create amazing art using the famous bricks. And one of his projects was to create abandoned houses using only white, gray, and black blocks, ending up with creations that look like they’re haunted, infested with the most terrifying apparitions imaginable.

But what’s most impressive about these sets is just how detailed they are. Considering their massive size (some are measured in feet, not inches), you really begin to lose sight of the fact that they’re created with Lego and, instead, think that they are made of something else entirely. It’s seriously impressive.

Check out more of Mike’s art HERE. This is what the artist had to say about the snow-covered, two-storey build below:

To my eyes, patterns of decay find a more pleasing path than an untouched object. A roof collapsed by the weight of snow, side shingles ripped by the force of winds, substructures rotting, insects and weather gnawing the exposed surfaces. I can picture those windy days where a shingle flies off. Or the sudden creaking, cracking and burst of tinder giving way under snow’s heavy hand. 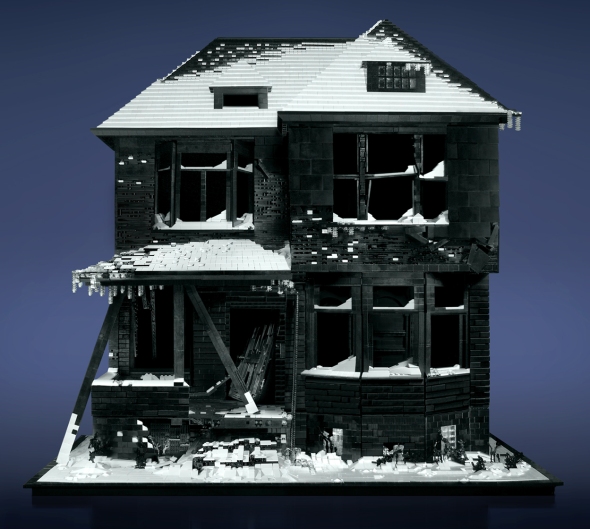 The Walking Dead in Legoland

I’ve been following the photography of Danielle Tunstall for a while now… thought some of you may appreciate these. Check out some amazing images HERE

LEGO The Hobbit sends players of all ages on an unforgettable interactive journey through the first two films in The Hobbit Trilogy, The Hobbit: An Unexpected Journey and the upcoming The Hobbit: Desolation of Smaug. Players will follow Bilbo Baggins as he is recruited by the Wizard Gandalf to aid Thorin Oakenshield and his Company of Dwarves. Bilbo leaves the comforts of the Shire on a journey through Middle-earth to help the Dwarves reclaim their lost Kingdom of Erebor within the Lonely Mountain. Along the way, he is introduced to ravenous Trolls, dangerous Orcs and, of course, Gollum and his precious Ring.
Check out the new trailer released today to see more of the highly anticipated LEGO® The Hobbit™ videogame featuring all of your favourite characters from the first two films in The Hobbit Trilogy in LEGO form, including Bilbo, Gandalf, and the Dwarves of Erebor.
I’d rather watch this than The Hobbit again…