A Trip to the Moon 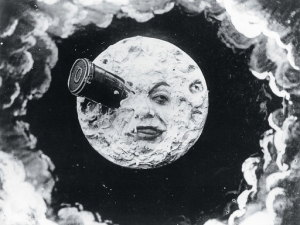 A Trip to the Moon or Voyage to the Moon (Le Voyage dans la lune) is a 1902 French black-and-white, silent, science fiction film. It is based loosely on two popular novels of the time: Jules Verne’s From the Earth to the Moon and H. G. Well’s The First Men in the Moon.

The film, which was released on the 1st of September, 1902, was written and directed by Georges Méliès, assisted by his brother Gaston. The film runs 14 minutes if projected at 16 frames per second, which was the standard frame rate at the time the film was produced. It was extremely popular at the time of its release, and is the best-known of the hundreds of fantasy films made by Méliès. A Trip to the Moon is the first known science fiction film, and uses innovative animation and special effects, including the well-known image of the spaceship landing in the Moon’s eye.

Like many of Méliès’s films, A Trip to the Moon was sold in both black-and-white and hand-coloured versions. A hand-colored print, the only one known to survive, was rediscovered in 1993 by the Filmoteca de Catalunya. It was in a state of almost total decomposition, but a frame-by-frame restoration was launched in 1999 and completed in 2010 at the Technicolor Lab of Los Angeles- and after West Wing Digital Studios matched the original hand tinting by colorizing the damaged areas of the newly restored black and white. The restored version finally premiered on 11 May 2011, eighteen years after its discovery and 109 years after its original release, at the 2011 Cannes Film Festival, with a new soundtrack by the French band Air. It was released by Flicker Alley as a 2-disc Blu-Ray/DVD edition, also including the documentary The Extraordinary Voyage about its restoration on 10 April 2012.

Méliès had intended to release the film in the United States to profit from it. Thomas Edison’s film technicians, however, secretly made copies of it and distributed it throughout the country. While the film was still hugely successful, Méliès eventually went bankrupt. This was due in part to the eventual view which was held towards his films that the special effects were overshadowing the plot.

While promoting his film Hugo, which was partly based on Méliès life, Martin Scorsese told Jon Stewart on The Daily Show, that, “He [Georges Méliès] lost basically most of his financing when the bigger companies came in. What happened here. . . at that time there was a lot going on with copyright and not copyright and that sort of thing.” Stewart said, “There is a story that Edison had taken one of his [Georges Méliès] films, brought it to America and showed it and it became enormously popular in America. But Edison decided not to pay I guess what we would call royalties.” Scorsese replied: “That’s right. So what happened, the film was I think the famous one, ‘A Trip to the Moon.’ They [Thomas Edison and his associates] were just taking the films and making dupes of them. So that was one of the reasons why he [Georges Méliès] was finished financially, ultimately.”

September 1, 2012 | Categories: Articles | Tags: A Trip to the Moon, From the Earth to the Moon, Georges Méliès, H. G. Well's The First Men in the Moon, Le voyage dans la lune, Voyage to the Moon | Leave a comment

Georges Méliès (8 December 1861 – 21 January 1938), was a French filmmaker famous for leading many technical and narrative developments in the earliest cinema. He was very innovative in the use of special effects. He accidentally discovered the stop-trick, or substitution, in 1896, and was one of the first filmmakers to use multiple exposures, time-lapse photography, dissolves, and hand-painted color in his films. Because of his ability to seemingly manipulate and transform reality through cinematography, Méliès is sometimes referred to as the First “Cinemagician”.

He directed over 530 films between 1896 and 1914, ranging in length from one to forty minutes. In subject matter, these films are often similar to the magic theater shows that Méliès had been doing, containing “tricks” and impossible events, such as objects disappearing or changing size. These early special effects films were essentially devoid of plot. The special effects were used only to show what was possible, rather than enhance the overall film.

Méliès’s early films were mostly composed of single in-camera effects, used for the entirety of the film. For example, after experimenting with multiple exposure, Méliès created his film The One Man Band in which he played seven different characters simultaneously.

His most famous film is ‘A Trip to the Moon’ (Le voyage dans la Lune) made in 1902, which includes the celebrated scene in which a spaceship hits the eye of the man in the moon. Also famous is ‘The Impossible Voyage’ (Le voyage à travers l’impossible) from 1904. Both of these films are about strange voyages, somewhat in the style of Jules Verne.  These are considered to be some of the most important early science fiction films, although their

approach is closer to fantasy.

In addition, horror cinema can be traced back to Georges Méliès’s ‘Le Manoir du diable’ (1896). A print of the film was acquired by Thomas Edison, who then duplicated and distributed it in the United States, where it achieved financial success; however, Edison did not pay any revenues to Méliès.