As we near the start of Westworld Season 2, the marketing machine has clicked into gear, teasing with a new teaser , revised new website HERE and cool poster with hidden binary code. Producers Jonathan Nolan spoke to EW today:

“We don’t like to endlessly build mystery; we like to settle our debts by the end of the season,” Nolan said. “We want to feel like the show is rocketing ahead. The first season was a journey inward; this is a journey outward. It’s a search for what else is in the park, and what else is beyond the park.” 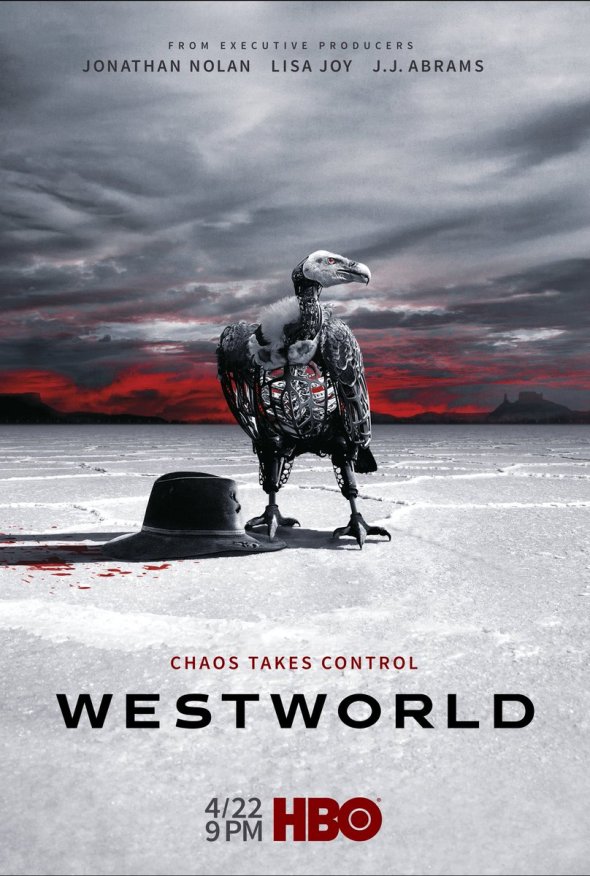 As this show attempts to question our understanding of reality, we still haven’t explored outside the confines of this manufactured theme park.

“If we were to describe the show as one camera angle, it would be a steady pull out revealing more and more context,” Nolan says. “So as the hosts learn more about their world—and other worlds, and the real world—the audience is doing the same thing.”

While the creators were hesitant to say if they’d be spending much time in Shogun World, they do confirm that it will take place outside of Westworld.

“This year is much more of a road show—Sweetwater isn’t home anymore,” Nolan tells EW, teasing that leaving behind Westworld is only the beggining into where and when the real world begins. “These hosts don’t live on the same time frame we do and don’t have the four-year life span of replicants [like in Blade Runner]. If left to their own devices, they could live forever. So our story has some real scope to it.”

Certainly they’ve left it open for the inevitable Seasons 3-7, but for now, I can’t wait to see where Season 2 takes us next month.

It’s shaping up to be a big year for Star Trek director J.J. Abrams. It has just been announced that he will be helming the next Star Wars movie. “It’s done deal with J.J.,” a source with knowledge of the situation told Deadline late yesterday. Argo director Ben Affleck was apparently also keen, however, Abrams was courted heavily by producer Kathleen Kennedy to take the Star Wars job. Expected in 2015, Abrams’ Episode VII effort will be the first new Star Wars movie since 2005′s Episode III: Revenge Of The Sith.

Michael Arndt is writing the script for the first instalment of the relaunch of George Lucas’ franchise by Disney. The company bought Lucasfilm on October 30, 2012 for $4 billion with the Force franchise as the jewel in the crown. At the time, Disney CEO Bob Iger announced that three more Star Wars films were in the pipeline. Abrams’ other space-based franchise sequel Star Trek Into Darkness comes out on May 17. This weekend, the Producers Guild of America will honour the Lost creator with its 2013 Norman Lear Award For Television, which it will be presented during the 24th Annual PGA Awards.

NBC’s new take on serial killer Hannibal Lecter is shaping up to be quite an interesting (and series-TV-friendly) departure from films like Silence of the Lambs. Reported by socialpsychol HERE in November 2011.

Bryan Fuller (Pushing Daises, Heroes) is taking five pages of backstory about the infamous cannibal psychiatrist from Thomas Harris’ book Red Dragon and using it as the basis for the first couple seasons of his planned drama.

Hannibal, which has received a 13-episode series order, features Lecter solving crimes with empathic FBI profiler Will Graham (Hugh Dancy). For the first time, viewers will spend quality time with Lecter while he’s at large and before the world knows his secrets, working side by side with a similarly brilliant man who is destined to catch him.

“It’s before he was incarcerated, so he’s more of a peacock,” Fuller tells EW.com. “There is a cheery disposition to our Hannibal. He’s not being telegraphed as a villain. If the audience didn’t know who he was, they wouldn’t see him coming. What we have is Alfred Hitchcock’s principle of suspense — show the audience the bomb under the table and let them sweat when it’s going to go boom. So the audience knows who Hannibal is so we don’t have to overplay his villainy. We get to subvert his legacy and give the audience twists and turns.”

“It really is a love story, for lack of a better description, between these two characters,” Fuller says. “As Hannibal has said [to Graham] in a couple of the movies, ‘You’re a lot more like me than you realize.’ We’ll get to the bottom of exactly what that means over the course of the first two seasons. But we’re taking our sweet precious time.”

“Doing a cable model on network television gives us the opportunity not to dally in our storytelling because we have a lot of real estate to cover,” Fuller says. “I pitched a seven-season arc including stories from various [Thomas Harris] books.”

The show will include familiar characters from Harris’ novels, though he’s “Starbucking” the genders of a couple of them. FBI boss Jack Crawford will remain male, but Dr. Alan Bloom is becoming Dr. Alana Bloom, and tabloid journalist Freddy Lounds is becoming tabloid blogger Fredricka Lounds.

Between Hannibal and Fuller’s Munsters reboot pilot Mockingbird Lane, the writer certainly has his hands full. Still, there’s one other TV series idea that we’re all hoping eventually gets off the ground — the return of Star Trek.

Fuller has previously spoken to director-producer Bryan Singer about teaming to reboot the TV franchise, though any movement depends on rights-holder Paramount and Trek’s current creative kingpin, J.J. Abrams (who, of course, knows a thing or two about making TV shows too). The consensus has been that there is unlikely to be a Trek TV show while the current movie franchise is still regularly hitting theaters.

“Bryan and I are big fans of Trek and have discussed a take on what we would do, and we would love to do it,” Fuller says. “I don’t think anything is going to happen in any official capacity until after the next movie comes out. And I’m sure it would be wisely under J.J. Abrams’ purview of what happens. He’s the guardian of Trek right now.”