Franck Khalfoun (“Maniac”) wrote and will direct the horror movie for Dimension Films and Blumhouse. Fresh off supporting turns in “The Giver” and “Vampire Academy” for the Weinstein Company, “Shameless” star Cameron Monaghan is nearing a deal to join Disney Channel star Bella Thorne in the new “Amityville” horror movie that Blumhouse is producing for Dimension Films, an individual familiar with the project told The Wrap online.

Franck Khalfoun (“Maniac”) wrote and will direct the film, which will star Jennifer Jason Leigh as a single mother who moves her three kids into the “Amityville” house that has a very dark history. Gotta say this is great news as Khalfoun did a fantastic job with Maniac, the most original take on a horror film of 2013.

Dimension had planned on reigniting the popular “Amityville” horror franchise using a found-footage angle but that idea has been dropped in favour of a fresher take. The original “Amityville Horror” was released in 1979 and received a high-profile remake in 2005 that starred Ryan Reynolds, Melissa George and Chloe Moretz. The franchise is based on Jay Anson’s book “The Amityville Horror: A True Story.” 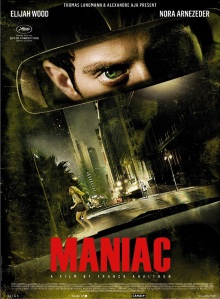 New Zealand’s Office of Film and Literature Classification has banned the new Elijah Wood remake of Maniac; stating that it can be shown only if it’s being used in a tertiary media, a film studies course or screened as part of a festival. And in each case, the audience must be over 18. Directed by Franck Khalfoun and produced by The Artist‘s Thomas Langmann, Maniac is a remake of William Lustig’s 1980 grindhouse classic. It premiered in Cannes in 2012 and was released last month in the U.S. by IFC Midnight. It’s shot entirely from the POV of Wood’s character and the OFLC decision says that may be injurious to the public good because the viewer is put in the position of the killer. The ruling also means the film cannot be released on DVD.

The ban beyond festival screenings “is an insult to the intelligence of the adult population of New Zealand and does little more than to serve as an open invitation to illegally pirate the film. We are flabbergasted,” said Neil Foley of Melbourne, Australia-based distributor Monster Pictures. In a blog post, Monster said it will “explore every option” to have the ban revoked, “but at this stage it ain’t looking good.” Maniac is the first film to receive the festival-only classification since Eric Steel’s suicide documentary The Bridge in 2007. Maniac is screening at the New Zealand International Film Festival and Monster is eyeing an October release in Australia.