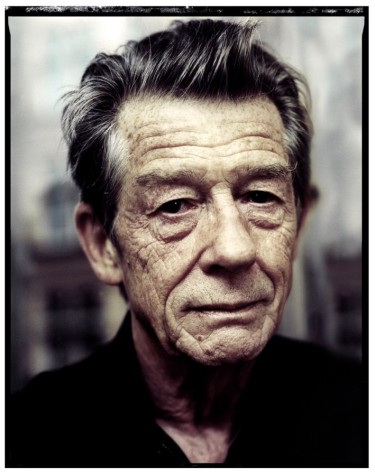 Sir John Hurt, who won a BAFTA and an Oscar nomination for his iconic portrayal of the Elephant Man, has died. The star, one of Britain’s most treasured actors, died aged 77 at his home in Norfolk after a long battle with pancreatic cancer, it was revealed yesterday.

His widow, Anwen Hurt, today said it will be ‘a strange world’ with out the actor, whose death has prompted an outpouring of grief from the showbusiness industry, with director Mel Brooks and J K Rowling among those paying tribute. Mrs Hurt added: ‘John was the most sublime of actors and the most gentlemanly of gentlemen with the greatest of hearts and the most generosity of spirit. He touched all our lives with joy and magic and it will be a strange world without him.’

Despite revealing that he had been diagnosed with pancreatic cancer in the summer of 2015, Hurt was matter-of-fact about his mortality.

Speaking to the Radio Times, he said: ‘I can’t say I worry about mortality, but it’s impossible to get to my age and not have a little contemplation of it. We’re all just passing time, and occupy our chair very briefly,’ he said.

Born in Derbyshire in 1940, the son of a vicar and an engineer, Hurt spent what he described as a lonely childhood at an Anglo-Catholic prep school before he enrolled at a boarding school in Lincoln.

His acting aspirations were almost shattered forever by his headmaster’s insistence that he did not stand a chance in the profession. He left school to go to art college but dropped out, impoverished and living in a dismal basement flat.

He finally plucked up enough courage to apply for a scholarship and auditioned successfully for the Royal Academy of Dramatic Art in London, although he later recalled being so hungry he could hardly deliver his lines.

Hurt played a wide range of characters over the course of 60 years, was well known for roles including Quentin Crisp in The Naked Civil Servant, the title role in The Elephant Man and more recently as wand merchant Mr Ollivander in the Harry Potter films. However, John Merrick notwithstanding here are a few of my personal favourte John Hurt roles:

Hurt was fantastic in Midnight Express (1978), for which he won a Golden Globe and a BAFTA and was nominated for an Academy Award for Best Supporting Actor. Around the same time, he lent his voice to Ralph Bakshi’s animated film adaptation of Lord of the Rings, playing the role of Aragorn. Hurt also voiced Hazel, the heroic rabbit leader of his warren in the exceptional film adaptation of Watership Down (both 1978) and later played the major villain, General Woundwort, in the animated television series.

His other role at the turn of the 1980s included Kane, the first victim of the title creature in the Ridley Scott film Alien (1979, a role which he reprised as a parody in Spaceballs). Gilbert Ward “Thomas” Kane is the Nostromo‘s executive officer, who during the investigation of a wrecked ship, moves closer to an egg to get a closer look. The now iconic ‘facehugger’ attaches to him and, unbeknownst to him and the crew, impregnates him with an Alien embryo. Kane remains unconscious until the facehugger dies and falls off. At dinner afterwards, Kane goes into convulsions; an infant Alien bursts through his chest, killing him in one of cinemas most famous scenes.

He also featured in a few graphic novel adaptations before they became big business for everyone, Hellboy (2004) and it’s sequel Hellboy II: The Golden Army (2008) based on the graphic novels by Mike Mignola are great fun. He also took a similar role to that of Big Brother in the film V For Vendetta (2006), when he played the role of Adam Sutler, leader of the fascist dictatorship.

Of his latter years I particularly enjoyed his portrayal of the crotchety and bigoted Old Man Peanut in  44 Inch Chest (2009), and his support roles in Brighton Rock (2010) and Tinker, Tailor, Soldier, Spy (2011).

Alien Chestburster – Art of the Scene

A newborn Xenomorph bursting violently from John Hurt’s chest is one of the most iconic, and important, scenes in science fiction or horror movie history. A lot went on before and after Ridley Scott shouted “Action”

Superior Firepower – The making of Aliens

In this behemoth of a documentary (3 hours) we get to see everything that went into making Aliens, from the construction of the APC to the Queen her slobbering self. The doc is packed with great information on the scripting, set building, and shooting of the film, so free up a block of your time and check it out.