Produced by Ben Howling, Yolanda Ramke, Marcus Newman, Daniel Foeldes for Tropfest Australia. Stranded in the midst of a zombie apocalypse, a man sets in motion an unlikely plan to protect his precious daughter.

The original short film has now been made into a feature starring Martin Freeman.  Due out next month, check out the trailer below:

It was supposed to be so simple. You do a job, you make the meet, you get paid.

As an experienced flipper, Jimmy “Skinny” Skinford knows the protocol all too well. Having said that, being kidnapped and forced to dig your own grave will spanner the nicest of deals in the sharpest of ways.

But his fortune turns when a push of his dead man’s shovel unearths the opportunity of a life time; a woman, buried but still breathing, who just can’t seem to die. Her mysterious gift extends to others through touch and in her company Skinny launches head first into a scheme of unparalleled mayhem.

Coming face to face with the most depraved deviates of the criminal underworld, Skinny will have to pay his dues in order to make the meet, get his payload and have his chance at immortality.

But this gift horse comes with plans of her own, and dark consequences that threaten to sever Skinny’s world piece by piece.

The Boy is an original horror-thriller directed by William Brent Bell (The Devil Inside) starring Lauren Cohan (“The Walking Dead”).
Greta (Cohan) is a young American woman who takes a job as a nanny in a remote English village, only to discover that the family’s 8-year-old is a life-sized doll that the parents care for just like a real boy, as a way to cope with the death of their actual son 20 years prior. After violating a list of strict rules, a series of disturbing and inexplicable events bring Greta’s worst nightmare to life, leading her to believe that the doll is actually alive.

The first trailer for Sundance winner Robert Eggers new film, The Witch, out in 2016.

Writer/director Robert Eggers’ debut feature, which premiered to great acclaim at the 2015 Sundance Film Festival (and won the Best Director Prize in the U.S. Narrative Competition), painstakingly recreates a God-fearing New England decades before the 1692 Salem witch trials, in which religious convictions and pagan folklore famously clashed. Told through the eyes of the adolescent Thomasin – in a star-making turn by newcomer Anya Taylor-Joy – and supported by mesmerizing camera work and a powerful musical score, THE WITCH is a chilling and groundbreaking new take on the genre.

James McAvoy and Daniel Radcliffe star in a dynamic and thrilling twist on a legendary tale. Radical scientist Victor Frankenstein (McAvoy) and his equally brilliant protégé Igor Strausman (Radcliffe) share a noble vision of aiding humanity through their groundbreaking research into immortality. But Victor’s experiments go too far, and his obsession has horrifying consequences. Only Igor can bring his friend back from the brink of madness and save him from his monstrous creation. 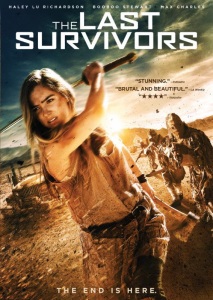 The Last Survivors centers on a teenage girl fighting to protect the last working well in a drought-stricken land. At the edge of an expansive, dusty valley, all that remains of the Wallace Farm for Wayward Youth are some hollowed-out husks of buildings. Seventeen-year-old Kendal (Haley Lu Richardson) can barely recall when the Oregon valley was all lush farmland. It’s been a decade since the last rainfall, and society at large has dried up and blown away.

Kendal and her last friend on earth, Dean (Booboo Stewart) barely scrape by while dreaming of escape. Dean is ill and can stay alive only by drinking water regularly – luckily, he and Kendal have access to a special well with enough water for both of them. But when a greedy water baron lays claim to what little of the precious resource remains underground, Kendal must decide whether to run and hide or bravely fight for the few cherished things she has left.

Here’s the official trailer for A&E’s upcoming TV series Damien, which quite literally follows the events after the 1976 psychological horror film The Omen. The trailer features many links the original, including footage from the film.

“Fans of that first movie will also be interested in finding out where Damien’s been for those missing 25 years since the last time we saw him when he was a boy and meeting him now,” showrunner Glen Mazzara told The Hollywood Reporter HERE

“I think ‘Damien’ is cutting-edge material,” he adds. “It’s trying to push the boundaries as far as violence and horror go. There’s a lot of really great drama on TV and that was not the case in 1976 when the film came out. So the bar is set so high given other great horror shows that are on TV. We have our work cut out for us; everybody is really interested in pushing the boundaries. I think we’ve got a few episodes that people are going to be talking about.”

Mazzara also reveals this is a conspiracy thriller:

“This really has a high-level of conspiracy. It plays as a conspiracy thriller because everybody wants Damien on their side or eliminated. There are a lot of different groups vying to either control him or eliminate him. There’s a thriller aspect to it, which is tricky and something that I haven’t done before and that comes directly out of the original film.”

But how will this work as a long-running television series? He explains:

The ten-episode “Damien” follows the adult life of Damien Thorn (Bradley James), the mysterious child from the 1976 film who has grown up, seemingly unaware of the satanic forces around him. Haunted by his past, Damien must now come to terms with his true destiny — that he is the Antichrist, the most feared man throughout the ages.