Set in an arid future, where dwindling water supplies are sending the inhabitants of a city to the brink of chaos, Jason Wishnow’s “low-fi sci-fi” short The Sand Storm presents us with a dystopian vision of a potential life on Earth, based on real concerns over diminishing resources. Starring Chinese contemporary artist Ai Weiwei, making his acting debut and shot by renowned cinematographer Christopher Doyle (Hero, In the Mood For Love), this high-profile short transports viewers into a frighteningly believable projection of what could happen to our world if gripped by a global water shortage.

Feeling a little narratively unbalanced, Wishnow’s story focuses largely on a love-triangle, with the film’s most interesting character, Ai Weiwei’s water smuggler, feeling a little like he’s left on the peripheries. Described as “the implied set-up to an even bigger story”, whilst The Sand Storm does feel a little incomplete, as an introduction to a universe we’ll hopefully see more of, it’s a perfect set-up. Presenting us with just enough glimpses of his intriguing futuristic world and leaving us eager to find out more about Ai Weiwei’s character, it feels like we’re just seeing the very tip of Wishnow’s promising narrative. 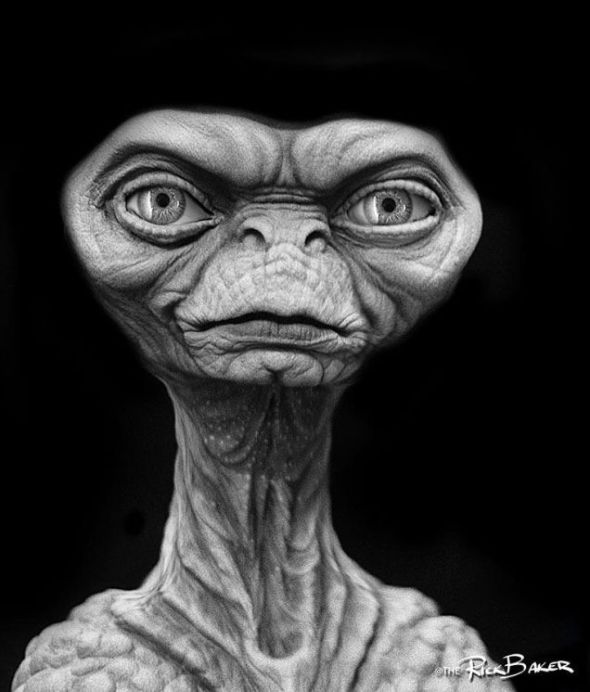 After Close Encounters of the Third Kind became a hit, Columbia Pictures wanted a sequel. Director Steven Spielberg did not, but the one thing he wanted less than a sequel was for Columbia to make one without him. So he set about developing a much darker, horror-tinged film that would act as a follow-up to Close Encounters. It was originally called Watch the Skies (which was also an early Close Encounters title) and eventually referred to as Night Skies.  John Sayles scripted, and Rick Baker was hired to design the alien concepts.

Rick Baker has been posting images of his designs on Twitter, and they’re wonderful to see. Several will look very familiar, too. Because while Night Skies was never made, the concepts from the film ended up in several other Spielberg projects, E.T. adopted several big ideas, and films such as Poltergeist and Gremlins took concepts and pointers. Courtesy of The Rick Baker and /Film.

After revisiting his classic Alien with the upcoming 3D Fox film Prometheus, Ridley Scott is committing to direct and produce a film that advances his other seminal and groundbreaking science fiction film from the past. Scott has signed on to direct and produce a new installment of Blade Runner. He’ll make the film with Alcon Entertainment, producing with Alcon partners Broderick Johnson and Andrew Kosove. This would be the most high profile project for Alcon since The Blind Side. They got control of the franchise earlier this year, but it’s a whole different ballgame with Scott at the helm.

It’s unclear at this point whether Scott intends to do a sequel or a prequel to the 1982 film that was loosely based on the Philip K. Dick novel Do Androids Dream of Electric Sheep? Also unclear is whether they start fresh or reach out to Harrison Ford. The original took place in dystopian Los Angeles in 2019, in which organic superhuman robots called replicants escaped and are hiding somewhere on earth.  Ford played Richard Deckard, a burnt out blade runner assigned to hunt them down. His tired life gets altered when he himself falls for one of the replicants and struggles to keep her from being destroyed.

The film was not a blockbuster when first released–it grossed $32 million in its original run–but the film has gained esteem over time. From the bleak but breathtaking  visuals to the complex storyline and themes of mortality, Blade Runner became a classic. There has periodically been talks of doing a sequel but those never really went anywhere.  After injecting state of the art 3D in reviving Alien, imagine what Scott can do with Blade Runner? Now, the filmmaker is ready to engage. Alcon has its output deal with Warner Bros, which remastered and released a 25th anniversary version on DVD and Blu-Ray in 2007. Warner Bros made the original film.

This is just the first step and the project will have to be written and it will likely evolve during that process. That’s what happened on Alien, which began as a prequel to his 1979 classic. That changed when Lost‘s Damon Lindelof came onboard with a different take on the subject matter that imprinted on Scott and Fox  executives. They wound up making Prometheus, which Fox considers an original but which I’ve heard is a cousin to the original Alien franchise. That film will be released June 8, 2012, with Charlize Theron, Michael Fassbender, Noomi Rapace, Patrick Wilson, Idris Elba and Guy Pearce starring.