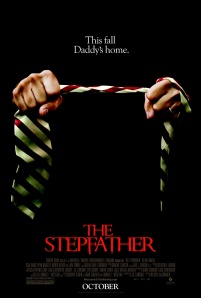 Michael (Penn Badgley) returns home from Military school to discover that his mother (Sela Ward) is living with her new fiancé David (Dylan Walsh). It seems to Michael that everyone loves David; his mother, his younger brother and sister, his aunt and all their friends. However David is a little too friendly, always willing to lend a helping hand, obsessed with notions of ‘family’ and trying just a little too hard to be Michaels new best friend.

As Michael gets to know David he becomes suspicious that he may not be all that he seems. He enlists the help of his girlfriend Kelly (Amber Heard) and estranged father (Jon Tenney) to try to discover more information about the man who would be his stepfather.

This is another pointless remake of a cult classic. The original ‘The Stepfather’ (1987) was a creepily enjoyable flick carried by a terrific performance from Terry O’Quinn. That film is worth a solid 3 stars (out of 5). Unfortunately the remake doesn’t feature O‘Quinn, it also doesn’t have any of the same menace or tension of the original.

The update, as with most of them, is well shot, well lit and edited however throwing all these technically superior people onto a project where the script is lame, dialogue weak, the pacing is off and is devoid of any real tension or thrills (usually a pre-requisite for this genre) is a waste of time, money and talent.

To be fair to the actors they do a decent enough job with the material they’ve been given. Dylan Walsh is okay but his character is so obviously evil that you can’t have any sympathy for anyone who’s

taken in by his oily demeanour. Sela Ward plays Michaels mother as a typically blinkered, besotted spouse, the stereotypical type who never sees the abuse before it’s too late. Penn Badgley shows some promise, he’s no less believable than Shia Laboef in Suburbia and a lot less annoying. Amber Heard spends most of the movie in her bikini which is no bad thing. She is better than this material and should command some better roles fairly soon.

As the body count rises the movie should become more fun, it doesn’t. It just becomes more stupid. Of course we’re used to damsels falling over, hiding in stupidly obvious places and generally deserving their fate; as we are used to killers being almost impossible to kill, coming back from the dead and appearing silently behind victims. That doesn’t mean those things can’t be done well, but they’re not done well here. The best thing I can say about The Stepfather is that it’s better than the (in name only) remake of ‘Prom Night’.