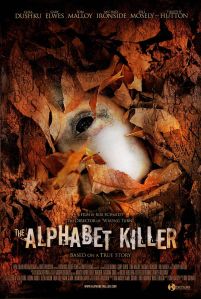 In Rochester, a young girl has been abducted, raped and murdered. The FBI believe that the killer is a drifter; Detective Megan Paige (Eliza Dushku) believes otherwise. She thinks that the killer knew the girl and selected her because her first and last initials and area her body was dumped all began with the letter ‘C’; she also believes that he will kill again. She works obsessively, her mental state fragments and she starts to see visions of the dead girl; unable to find any leads she has a complete breakdown and in despair, slits her wrists.

After therapy and on medication, Megan is reinstated, working on limited duties in the records office and on reception duties. However, she is vindicated when another murder follows the same pattern, a young girl, same first and last initial and area where the body was discovered all match her theory. Back on the case Megan starts to get closer to the killer as another murder takes place…

The Alphabet Killer has some good ideas but none of them are implemented very well. The script, direction and acting are all average at best.

I must admit to watching this movie for two reasons, one, that is another ‘based on real events’ thriller and I was attempting to watch as many as I could before compiling a list of the good and bad serial killer movies; however the main reason is that I quite like Eliza Dushku, however her looks can only get her so far. She isn’t the only one who puts in a poor performance; most of the cast are either trying to hard or not at all. Which is disappointing as the supporting cast; Timothy Hutton, Cary Elwes, Tom Noonan and Bill Moseley are all generally good. Can someone please give T

imothy Hutton a good role before his talent is completely wasted.

The scriptwriter Tom Molloy and director Rob Schmidt don’t seem to be sure exactly what it is they’re aiming for. The movie tries too hard to be all things to everyone and doesn’t work on any level. There are good moments and it is photographed well, however as a whole the movie is too stereotypical, predictable and clichéd to recommend. Schmidt directed ‘Wrong Turn’ (2003), which although not a classic was much more enjoyable. If you want to see some good serial killer detective thrillers, stick

with Manhunter, Silence of the Lambs, Se7en or Zodiac and give this a miss.