REVIEW: My Soul to Take 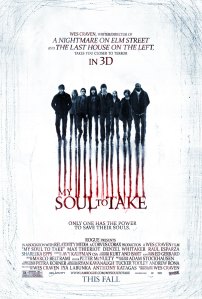 In the town of Riverton, a psychopathic killer with split personalities is shot after killing his pregnant wife and is about to kill his daughter. En route to hospital he attacks the Police (again) and the ambulance crashes, his body is never recovered.

16 years later, seven teenagers born on the night of the ‘Riverton Rippers’ demise gather at a yearly ritual to ward off the evil spirit of the ripper who may want to kill them as they just might be hosts for the souls of his victims, released into their newborn bodies the night he died. The kids are a check-list of high school personalities, there’s the bullying jock Brandon (Nick Lashaway), pretty girl Brittany (Paulina Olszyinski), religious girl Penelope (Zena Grey), quick-witted geek Alex (John Magaro), Asian Jay (Jeremy Chu), blind black kid Jerome (Denzel Whitaker) and weird quiet kid Adam ‘Bug’ Heller (Max Thieriot). Bug has suffered more than most of the other kids; he was cut from his mother’s womb after she and Bug’s father were killed in a fatal car wreck. Bug has also suffered migraines, blackouts and hears voices, his older sister Leah/Fang (Emily Meade) doesn’t make his life any easier either, she spreads gossip and lies about Bug at school, convinced that her life was ruined the night Bug was born.

Now Bug is seeing visions of the teenage victims and taking on each of their odd affectations after they’re killed by the ripper. Is Bug absorbing their souls? Is he committing the crimes? Did the ripper survive and come back to wreak revenge? Who really cares..?

My Soul to Take is not one of horror guru Wes Craven’s better movies. The man who brought us ‘The Last House on the Left’, ‘The Hills Have Eyes’, ‘A Nightmare on Elm Street’, ‘Red Eye’ and ‘Scream’ has made another movie that has more in common with his lesser works ‘Shocker’ and ‘Cursed’. Not one of his better efforts then…

The script has a fairly simple premise. Can the souls of a killer and his victims survive within other bodies and can that killer’s soul exact revenge on his victims again? However Craven attempts to over complicate things as the movie nears its end, having characters extrapolating on the curse, their souls, the ripper and the real origin of Bugs grisly birth. The young cast are all fairly believable, proving yet again that Craven can elicit good performances from young actors better than most in the genre.

The ‘ripper’ isn’t one of Cravens better killers. The man who invented Freddy Krueger can do so much

better than this; even the kills are all fairly tame and unimaginative.

Not as bad as I’ve made it out to be, but I expect more from Craven. Rent one of his better movies.