While Hollywood has suffered one of the worst summers in years, the horror genre is laughing all the way to the bank. Universal kicked the year off with massive successes, including Jordan Peele’s Get Out and M. Night Shyamalan’s Split, both topping $250 million worldwide. Even David F. Sandberg’s Annabelle: Creation could topple $300m. While we’re all celebrating these successes none are as important as Warner Bros./New Line Cinema’s IT, which has shattered September records by topping $100 million during its opening weekend.

That $117 million is just in the States, with early international reports just coming in adding $62m to the total. Early Sunday morning estimates have the worldwide gross at $179 million. A $500+ million worldwide total would be some accomplishment, at this stage that looks likely and something no one was saying before last Thursday!

IT could initiate a revival in bigger budget horror…

I just saw this update from the Bernie Wrightson facebook page and am truly saddened to share the news posted by Bernie’s wife Liz. Bernie is one of my all time favourite artists, I am lucky enough to own 2 signed prints of his, of Frankenstein (pictured above) and The Texas Chainsaw Massacre. A true gentleman and towering talent of the comic book industry.

I apologize for our silence for the past few months. Last November Bernie began falling again, and having obvious problems with perception. He had to undergo yet another brain surgery to relieve bleeding, and then spend several weeks undergoing in-patient rehabilitation. Unfortunately, it appears that he has lasting damage: he has extremely limited function on his left side, and is unable to walk or reliably use his left hand, among other limitations.

W…e have had to come to the sad conclusion that he is now effectively retired: he will produce no new art, and he is unable to attend conventions. Should this situation change I will happily announce it here.

He can still sign his name (in fact he was signing Kickstarter prints in the hospital!), and is otherwise pretty healthy and has good cognition. We expect to continue releasing signed prints, and offering occasional pieces of art for sale from the collection that remains. We both thank all of you for your continuing support and good wishes!

All our best,
Liz and Bernie Wrightson 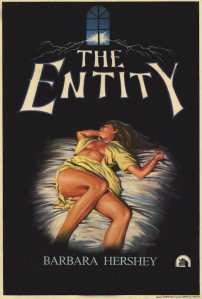 We’re used to remakes of every horror film we loved so I shouldn’t be surprised by the news that they are remaking the classic 1983 horror movie The Entity, according to Heat Vision.

James Wan, best known for directing Saw, Dead Silence, The Conjuring, Insidious and now Fast 7 will produce the remake with brothers Chad and Carey Hayes (House of Wax and The Reaping) on board to write the script. Roy Lee (The Ring, Godzilla, The Grudge, Poltergeist) will produce Entity with Wan.

The Entity told the true story of Carla Moran, a single mom who was abused physically and sexually by a supernatural demon. Barbara Hershey played Moran while Ron Silver played a doctor who believes the woman is actually abusing herself and experiencing delusions brought about by a troubled past. Also figuring into the proceedings was a young son, a boyfriend, and two parapsychologists.

“In his first film in nearly 15 years, the director of Henry: Portrait of a Serial Killer harks back to the depravity that made his 1986 debut a horror milestone. But less based in reality, The Harvest is closer to a fairy tale from Grimm’s darkest corners. Maryann (an impressive Natasha Calis) moves in with her grandparents after she’s orphaned. Desperately lonely, the preteen sets out to befriend a neighboring deathly ill, bed-ridden boy (Charlie Tahan), despite the outright disapproval of his mother (Samantha Morton). Maryann’s persistence pays off, however, and during a series of secret visits she gradually uncovers some seriously sinister goings-on in the house… Morton as the boy’s overprotective surgeon mom is the stuff of great screen villainy—at once utterly monstrous and tragically desperate—so much so that she makes even frequent heavy Michael Shannon, as the more subdued dad, pale in comparison.”

Wes Craven, the iconic horror director behind Last House On the Left, The Hills Have Eyes, A Nightmare On Elm Street and Scream, is partnering with 30 Days of Night co-creator Steve Niles, to adapt Niles’ upcoming comic The Disciples, drawn by Christopher Mitten, a sci-fi horror story set in space. Reported by The Hollywood Reporter HERE

Universal Cable Productions, which produced shows such as “Being Human” and “Defiance”, is in the process of picking up the rights to the title, which is due to hit stands in May from Black Mask Studios.

Craven, who is not writing or directing, will exec produce along with Sara Bottfeld of Industry Entertainment.

Here’s a description of the debut comic:

Dagmar, Rick, and Jules, intrepid private eyes/bounty hunters, have been hired by a high ranking Senator to retrieve his teenage daughter who’s run off to join a mysterious religious cult.

This is no ordinary cult though. In the near future of “The Disciples,” the ultra-wealthy have become true Masters Of The Universe by colonizing moons throughout the solar system. Billionaire industrialist McCauley Richmond is one such colonist: he’s built a new society on Ganymede, a moon of Jupiter, where his flock of cultists can have the religious freedom to worship him.

But when the team reaches Ganymede in their Starship Venture, they discover something has gone horribly wrong…

This ghost story in space reunites comics’ king of the macabre Steve Niles with his longtime collaborator Christopher Mitten, whose stylish mix of grit and flow matches Steve’s sharp characterizations and taste for screams.

Great news for fans of Australian horror. Enzo Tedeschi, producer of Australian indie horror The Tunnel, has established Deadhouse Films as a new Australian production and distribution company for genre films with the aim to overcome Oz audiences’ reluctance to see genre movies in theatres.

Deadhouse says that it is “focused on boutique online global day and date distribution of genre movies and shows.” It will launch with Distracted Media’s science-fiction series, Airlock, at an unspecified date in the first half of the year. It expects to provide “unique and tailored guidance on production and release strategies to ensure the success of each project.”

“With an aim to provide independent film makers with a production and distribution avenue, Deadhouse Films’ scope will be to connect the many great Australian genre films out there with a dedicated and established audience,” said Tedeschi in a statement.

Australia has a long history of producing cult horror and genre films, including Mad Max, Saw, Wolf Creek, The Loved Ones and Razorback, but the country’s theatrical audiences have largely turned their back on the segment. Last year’s The Babadook, which got a launch at Sundance, was hailed by critics and genre fans, but grossed only US$200,000 (A$256,000) on local release. In contrast The Babadook earned $1.09 million in France and $2.03 million in the U.K.

High releasing costs, steep ticket prices and competition from English-language Hollywood are among the issues facing Australian genre films in their home market.

“The kind of film that we made, it’s kind of an art house film and a psychological thriller slash horror. These don’t traditionally do that well in Australia,” “Badadook” producer Kristina Ceyton told The Guardian recently