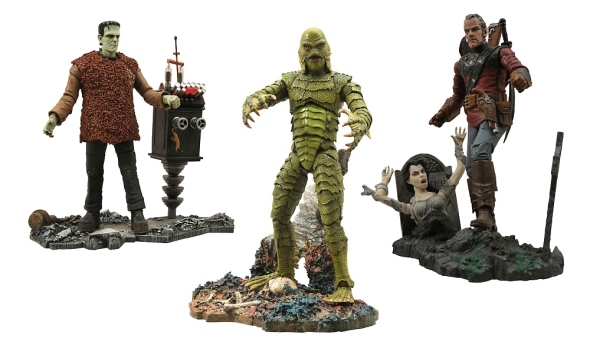 The newest assortment of Universal Monsters action figures is out now at Toys”R”Us and is coming soon to comic shops and specialty stores, as well as an all-new figure of the greatest monster hunter of all time.

Frankenstein’s Monster as he appears in Son of Frankenstein, and a super-poseable version of the Creature from the Black Lagoon. Both feature entirely new sculpts by Jean St. Jean, and both come packaged on a blister card with a small display base. Additionally, the Monster comes with the prosthetic arm of Inspector Krogh.

As a bonus, hanging alongside the Creature and Monster is Diamond Select Toys’ original take on the famous monster hunter, Van Helsing. Also sculpted by St. Jean, Van Helsing stands around 7 inches tall, and comes armed with an axe, a sword, a crossbow and a rifle, all of which can be carried on his back. Definitely not based on Van Helsing as portrayed by Edward Van Sloan in the 1930’s Universal classics… Now make a Hammer series and give us Peter Cushing, by far the best Van Helsing.