AMC has announced that it has renewed flagship drama The Walking Dead for a fourth season. But Glen Mazzara, who had served as showrunner following the abrupt departure of creator/original showrunner Frank Darabont early into the second season, is leaving. Speculations about Mazzara’s future on the show started when AMC didn’t follow its regular routine of giving The Walking Dead an early pickup despite the record-breaking ratings performance of the show’s recent fall portion of Season 3. There had been rumors that Mazzara was not happy on the show and may follow the slew of other showrunners who have departed AMC series. Darabont tapped Glen Mazzara as an executive producer and his No. 2 heading into Season 2, after Mazzara wrote a freelance script in Season 2. Mazzara was quickly elevated to showrunner when Darabont left.

“Both parties acknowledge that there is a difference of opinion about where the show should go moving forward, and conclude that it is best to part ways,” AMC and Mazzara said in a joint statement. “This decision is amicable and Glen will remain on for post-production on season 3B as showrunner and executive producer… AMC is grateful for his hard work. We are both proud of our shared success.” Here are individual statements from Mazzara and The Walking Dead executive producers Robert Kirkman, on whose comic the series is based, and Gale Anne Hurd:

My time as showrunner on The Walking Dead has been an amazing experience, but after I finish season 3, it’s time to move on.  I have told the stories I wanted to tell and connected with our fans on a level that I never imagined. It doesn’t get much better than that. Thank you to everyone who has been a part of this journey. – Glen Mazzara

I am in full support of both AMC and Glen Mazzara in the decision they have come to and believe the parties came to this decision in the best interest of the future of the show. I thank Glen for his hard work and appreciate his many contributions to The Walking Dead and look forward to working with him as we complete post production on Season 3. I am also excited to begin work on another spectacular season of this show that I know means so much to so many people. This show has always been the result of a wide range of extremely talented men and women working tirelessly to produce their best work collectively. I believe the future is bright for The Walking Dead. Thank you to the fans for your continued support. – Robert Kirkman

I am appreciative and grateful to Glen for his hard work on ‘The Walking Dead.’ I am supportive of AMC and Glen’s decision and know that the series is in great hands with one of the most talented and dedicated casts and crews in the business. I look forward to the show’s continued success. – Gale Anne Hurd

Awesome gang figurines from the classic movie, The Warriors, by Benjaminography… 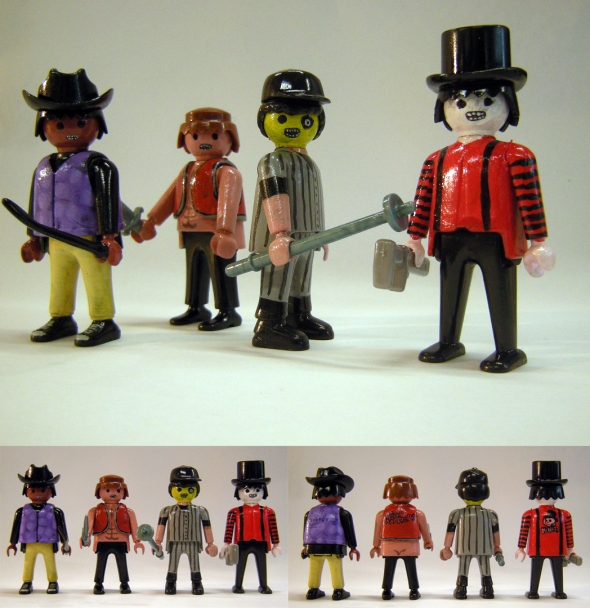